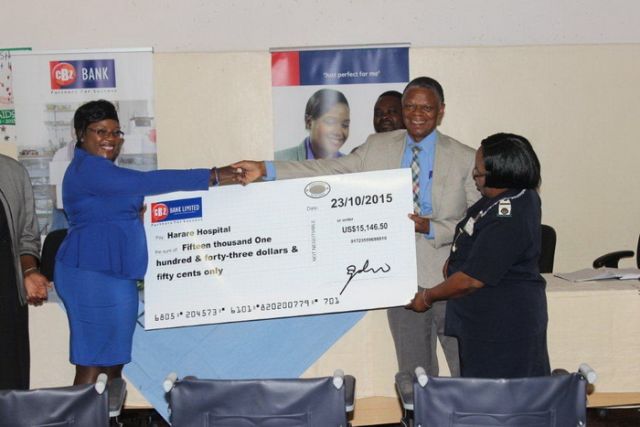 CBZ Holdings, the country’s leading financial services provider donated a variety of hospital equipment to Harare Hospital. The Financial Services group donated stretcher beds and wheel chairs for the emergency ward as well as assisted with the repair of cupboards in the paediatric ward. The donation which was valued at over US$15 000.00 also included the partitioning of the maternity ward. In 2013 CBZ donated 13 delivery beds to the same hospital.

Harare Hospital is one of the biggest referral hospitals in the country which houses the School of Nursing and also boasts of having the largest maternity referral ward in the country. The hospital is however plagued by severe shortages of equipment and supplies and this has worsened their ability to deliver their mandate of providing emergency health care to patients across the country.

CBZ Holdings donated material for one of the hospital’s main departments, the emergency ward since the ward assists people who come to the hospital in a critical condition mainly accident victims. Speaking at the handover of the donation, the Chief Executive Officer of Harare Hospital Ms Zvavamwe said the Hospital is striving for quality. The Noble act by CBZ Holdings will contribute immensely towards the infrastructural development of the hospital she said.

Speaking at the same event CBZ Holdings Head of Group Marketing and Corporate Affairs Dr Eldrette Shereni said CBZ Holdings is committed to giving back to the community. We value the relationship we have built with the Hospital over the years and we are indeed committed to remain your true partners for success said Dr Shereni.